Synopsis: The friends watch Aslan put an end to the world of Narnia. They meet Emeth.

The friends stand on the right side of Aslan. In ‘Biblical’ terms, this shows their importance and place of favour with their leader. (There are a number of other Biblical allusions in this chapter, which are helpfully listed in Ford’s Companion to Narnia. The influence of Revelantions on the entire book is notable, as well.)

One of my favourite scenes in the Narniad is the beautiful creation scene in MN. Here we see it’s opposite: the total destruction of the world. It is a sad but fascinating scene. There is silence instead of music, cold instead of warmth and death instead of life. However, I would love to see the descent of the stars. (I never pictured them quite as they appear in Pauline Baynes’ illustration, which reminds me more of Jack Frost.) Is Coriakin there? Ramandu? Tarva? Alambil? For me, nobody writes this sort of thing as well as Lewis. He can mix clarity of prose with dreamlike mystical elements. His writing about such moments is never arch, or self-conscious, or insincere.

The influence of Lewis’ beloved Norse mythology is present in the ending of the Narnian world is clear. In these myths, Ragnarok is the ending of the world, which sees the gods killed in a huge battle with monsters. A horn is blown to signal the beginning of the end. An eagle is present to witness events. The world is subsequently covered with water and the stars disappear.

Michael Ward’s ‘Planet Narnia’ links LB with the medieval idea of Saturn. (Death, destruction, melancholy etc.) Father time, the old man with the scythe, was based on Saturn. Here he appears, but we are told he will have a new name. We aren’t told what it is. (Ford mentions that this is a reference either to a work of George Macdonald or Revelation 2:17, or both.)

How did creatures like the monopods get across the sea to the door? How did water-based animals reach the door? Did insects have to face Aslan too?  (I suppose this is not the best section of the book to dissect in ‘logical’ terms.) To be fair, the idea of time and reality altering beyond the character’s – and our –  understanding is mentioned by the narrator.

Where did the creatures who entered Aslan’s shadow end up? (Maybe the best guess here would come from reading The Great Divorce.) Are the dumb animals’ fates different from the other beings?

How does Roonwit know what to do? Is it a centaur thing? Is it instinct, or has Aslan given him instructions?

I’m so glad that Poggin, the boar and the others have a happy ending.

Why are the giant lizards etc. necessary? Their entire existence seems very strange: sleep underground in massive caves for millennia, wake up, eat some trees, age rapidly, die, decay. (If the world around them wasn’t about to die they’d make amazing fossils for someone to find.) Do they not have souls to be judged by Aslan?

The red sun and the moon rising in the wrong place is a really unsettling image.

Why does Peter shut the door? Why not King Frank? Or Tirian? (Is this a reference to Saint Peter and his symbolic keys?)

I agree with Tirian – I would definitely cry if I watched Narnia die.

The dogs are delightful to read about here. They add some light relief to the seriousness of what is happening, too. 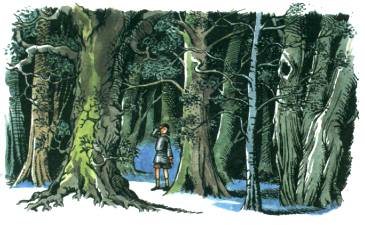 Synopsis: Trumpkin and the Pevensies row up Glasswater Creek. They camp overnight, then try to make their way to Caspian, but aren’t sure of the way. Lucy thinks she sees Aslan, but the others don’t, and vote not to go in the direction he is in.

Throughout the books, Lewis capitalises species, such as Dwarfs, Humans and Mice. I am sure he must have done this for a reason but so far can’t discover what it was. I’d love to find out if anyone else knows.

Lucy’s thoughts and actions as the others sleep don’t contribute to the plot as such, but again the ‘feel’ or tone of the book is enhanced. One of the most important books in Lewis’ life was George MacDonald’s ‘Phantastes’, which is a book very much focused on mood and imagery rather than traditional plotting. He describes discovering it in his autobiography, ‘Surprised By Joy’: ‘That night my imagination was, in a certain sense, baptized; the rest of me, not unnaturally, took longer. I had not the faintest notion what I had let myself in for by buying Phantastes… I saw the bright shadow coming out of the book into the real world and resting there, transforming all common things and yet itself unchanged.’  Lewis was enchanted by the dreamlike, spiritual feel of the story of a man who enters a different world. This sequence in Prince Caspian, involving Lucy trying to talking to the sleeping trees, is reminiscent of the slow, dreamy,  surreal world of Phantastes.

Again we glimpse the wider Narnian world, this time through its constellations: the Ship, the Hammer and the Leopard. I wish there was a complete map of the Narnian skies.

Once more, Susan is the ‘wet blanket’, and Lewis highlights this by having Peter snap at her with ‘pardonable sharpness’. She really doesn’t seem to be enjoying her visit to Narnia, as she is finding it stressful, which is made even sadder when you know where her story is going after this book.

When Edmund complains that girls ‘never carry a map in their heads,’ Lucy has the perfect response, ‘That’s because our heads have something inside them’. Being terrible at orienteering, this quote always cheered me up.

When discussing the wild, non-talking bear which attacks them, Lucy says, ‘Wouldn’t it be dreadful if some day, in our own world, at home, men started going wild inside, like the animals here, and still looked like men, so that you’d never know which was which’. This is a reflection of Lewis’ own concern for humanity, which he felt was in danger of turning away from God and nature, and focusing on things he saw as less important. Maybe a human without a soul is what Lucy is describing, at least as far as Lewis is concerned. Susan’s dismissal of this ‘impractical’ thought may be a foreshadowing of what would become of her later in the series.

One of the lessons I took from the interactions of characters in Narnia as a child was that it was the sign of a really good friend (or sibling) when they avoided saying ‘I told you so,’ as Trumpkin does here. It definitely meant you were a ‘brick’.

Lucy is cross that Susan speaks to her ‘like a grown-up’, but doesn’t help her own case by then stamping her foot angrily, as a child might.